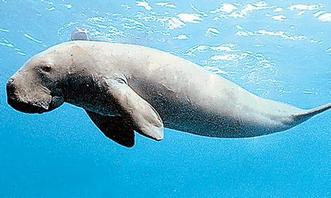 Dugong dugon, otherwise known as 'sea cows' which migrate from place to place, with no steady habitat, are called 'migratory animals'.  They are associated to as 'sea cows' because of their diet being mainly grass underwater, and cows' diets are also grass so the term sea cow isn't very surprising yet suitable. These cumbersome creatures when are fully grown, can be up to 3 metres in length and weigh between 250-300 kilograms despite it being a vegetarian and its main diet being only sea grass! This disappearing seagrass is due to land development. Surprisingly, the dugongs have been reported to reach the speed of over 25km/hr while swimming through the water. That is really fast noting that this is underwater and when you are underwater, there is a larger gravitational pull. Unfortunately enough for these marine animals, they are currently under the status of vulnerable to extinction and no one wants that to happen because dugongs do not create harm to anyone. So, I strongly recommend you to read on further or just navigate to the 'How you can help' page for more information on how to take action for these poor creatures.

Dugongs are very eccentric mammals with a strange appearance. They have tough grey skin that is coated with stiff hairs but oddly enough has a smooth belly. With its rough, tough and wrinkly skin, the dugongs' has appearance that resembles an elephant. The dugongs body are streamlined which allows it to move gracefully in the water, just like mermaids in the tales. They also have no dorsal fin but has fore-limbs instead of hind-limbs, which make them swim like dophins as they have a similar tail to them.

Even though dugongs may be large marine mammals, like all animals, they still have their predators. Their natural predators include lethal sharks, crocodiles and the vicious killer whale, which I want to clarify for you is a dolphin. People, undoubtedly, are the main threats to humans as they are often victims to boat collisions which seriously injures them with the sharp, rotating propellors. Also, some lunatics hunt them illegally for their meat and blubber as the dugongs' fat is a good source of oil. In Australia, dugongs are a traditional food to Aboriginals, but as they are considerate, they eat them smartly without wasting any food and they conserve them too by watching the amount they consume.

Dugongs have an average lifespan of approximately 70 years. Like normal animals, female dugongs carry the burden of the baby and they first start mating and breeding at the age of 6 - 17 years old. They will have babies, which are called calves, every 2 and a half - 5 years. The breeding process is quite violent and aggressive as the male that wants to mate with the female inflicts scars onto her back and to other males, signifying that the female dugong is his. The female dugong will carry the baby for about 14 months until the baby is due for pregnancy, which compared to a human which carries babies for only approximately 9 months, is a long time. Most of the calves are given birth to in Spring and will remain by its mothers side until it is about 18 months old, and suckles on its mothers teat, which is located under each flipper. Did you know that the male dugongs doesn't take care of its calf in anyway? Only the female parent tends for it unsurprisingly.

Their habitat is unsteady as they migrate around shallow, tropical waters in the Indo-Pacific Region. This is a very varied region because they like to stay warm during winter which tends to make the water go colder, obviously. As you can see below, there is an illustration of some parts of the world and the highlighted red areas are where dugongs live and swim/stay around with their herd, which they communicate with chirping, squeaks, trills and barks.

Below there is a video of a dugong made by Green Peace. Please click the play button to view the video.